The girl had 3 parties this year. One minuscule at home, one medium at school and one grand (not really) with friend’s at a craft shop.

For the home party it was just myself and Adi as M was enjoying @ India at that time. We woke up late, ate homemade pancakes for breakfast, started with preparations for rainbow cake and cup cakes, Adi played with bubbles at backyard, we baked cakes together, took head bath, went to nearby temple, visited store to buy another pack of whipped cream, came back home, continued with frosting, decorations, cut the cake around 7pm, distributed to grandma’s at next door, had an impromptu guest, treated them with cakes and went to bed on a happy happy note.  I let her loose on that day and she was constantly checking on me “Mommy you let me do this mess because its my special day and you don’t want me to get sad or mad right?”.. My neck was paining end of day with all that nodding to her check 🙂

For the cake we followed the recipe from here except that I didn’t use Soda. I just prepared the batter in usual way. Adi helped me in every step right from breaking the eggs to mixing the batter to pouring the batter on the pan.. You see her hands there 🙂 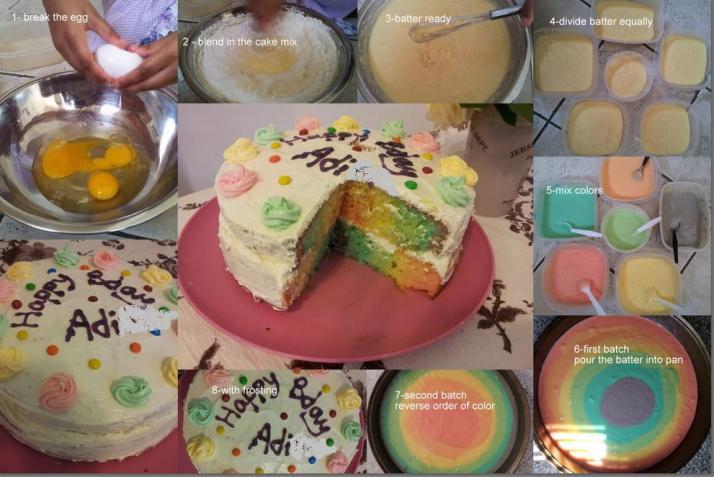 For the school party we bought cup cakes/juice boxes and dropped it with her class teacher in the morning itself. We didn’t go to school at the time of the party. The kids had the party at their snack time and Adi also distributed the cakes to teacher in other classes for a reason. The other day, Adi was the helper to another birthday kid, you see to carry the cup cakes. That day, she came home with 5 to 6 mini gifts that she got from the prize box of other classes when she accompanied the birthday girl. She said, the teachers were kind enough to let the helper also take some gift from their prize box. It seems the birthday girl gets the first chance to pick a prize and then the helpers get their chances. That day made her decide the plan for her birthday and ordered additional cup cakes for other class teachers 😀  who would say no to extra prize?

The craft party was a hit. It was a kids drop-off party at a nearby craft store. Some parents choose to stay back to chit chat with other parents. The hot topic of the day was summer camp options. What with 2.5 months of summer break? I will rant on another post about how bad I feel to send the girl every day to summer camp. I wish she gets a break. She can wake up at her own time, laze around the house, get bored, read books sighhh… I wish she gets a break from the morning routine at least during the summer break but I am helpless 😦

The party was from 11am to 1pm. We reached the spot at 11:10am. Please don’t stare at me like that.. We had to pickup balloons, birthday banner, party hats from the local store on the way and everyone in the town choose that time to hit the store. It was so crowded and we were delayed. So there I justified but you should have seen my face on seeing one parent standing in front of the venue. I kept a really really sorry face and he ended up convincing me that they just arrived.  The tables and other arrangements were already setup and slowly kids showed up one after the other.

The kids spent next two hours in the venue. First they were engaged in tote bag decoration with their name on it. The plan was to make them do a canvas painting as the next activity. But, by the time they were done with tote bags, pizza arrived and even the adults couldn’t resist. So, all of us relished the pizza and then continued with the next activity. The kids imagination went wild with canvas painting.  Each one of them came up with their own design. Then, kids cleaned themselves form messy paints and Adi cut the cake. Her friends reminded her to make a wish before blowing the candle. One of them shouted as “I wish to have wonderful children”. Now what does that mean on a 7 year old birthday party? ***rolls eyes*** Anyways, the cake was good with real strawberry filling that we ordered special.  Then, the kids were running around, playing with each other and I filled their tote bags with some more goodies like a cup and door hanger to decorate, M&M pack and some chocolates.  By this time parents were returning to pickup. The kids proudly showed their crafts to their parents and went home with tote bag filled with goodies and the canvas painting. There was a not-yet-two-year-old in the party and he got to make his first master piece too 🙂 For once, I didn’t forget to miss any item to take from home. The 7 shaped candle, paper plates, napkins, party hats, goodies et all. Adi gave “thumbs up” for the party that let me sigh in relief. 🙂

Some pictures from the craft party

Something exciting planned for coming long weekend. One of my long term wish ***fingers crossed*** 🙂 🙂