What better post can I choose to write about the little girl’s party details than my 400th one 🙂 It just happened..

I am sad to say that none of you came close to the theme. How could you forget the love affair she had with watching Cake Boss episodes back to back? But, your responses made me wonder about a book themed party. May be in one of the coming year. So, it was a baking themed party this year.

Please don’t break my heart by saying the invitation looks like an ice cream. It is supposed to be a cup cake.

cup cake shaped card was sticked and ballons were hanged around our vasantha maligai (home aka palace) at random spots.

I didn’t want to buy pizza so made vegetable pasta and mac n cheese at home. Adi made the toasted cheese sandwich, cut it into triangles and placed toothpick on each piece with absolutely no help from me. I also planned to make chicken strips but forgot 😦 And then there is always juice and ice creams.

Kids made chef hat and colored cup cake shaped foam pad. I was also planning to make them decorate their own apron but few days before the party, I got some colorful aprons from store so skipped this part. Do you see the chef hat and apron on the pic?

We played walking inside two straight lines from one end to another with eyes blindfolded (it was so much fun) and bingo. 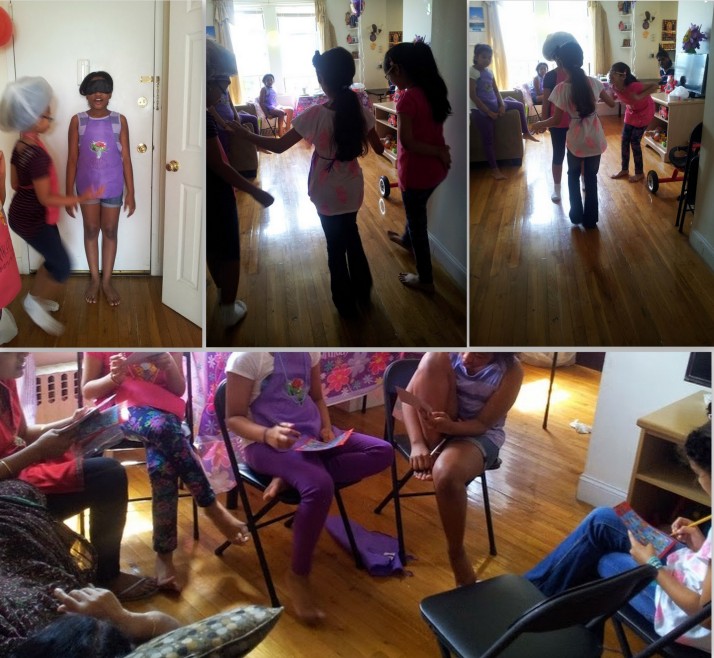 It was home made marble cake

Saved the best for last – Making of cake pops.. It was this close to become a disaster but M came to my rescue. The trial Adi and I made few weeks before party came out very well. I guess murphy was waiting to visit me on the day of party. The pops were falling apart, frosting was getting thicker before we could dip the pop and all that was not supposed to happen was happening.  At one point, the girls gave up and I was about to burst out, but M helped to pull it all together. He used milk as thinning agent for frosting, found a technique to keep the pop safe from breaking apart. It continued to be a disaster for few pops but still we managed to pack 5 pops for each kid as a return gift.

I made the cake base the previous day, crumbled it and kept it freezer. On the party day, the girls made the balls, dipped the balls in frosting to make pops and decorated it with toppings. Trust me, it doesn’t look as simple as it sounds. I called the parents and requested them to come one hour late for pick-up. One of the friend who agreed to help on the day ditched me and I was left there alone to handle everything by myself. Through out the party, my hands were shivering and I could not hold the pop or staple the chef hat. I don’t want to talk much about the friend in this happy post. It took me a long time to recuperate from it. My relationship with the said person is not going to be the same as before. This day made me better understand the word “better-half”. M exceeded my expectations for once and gave me a hand when it was needed the most. Without him, I would have called it quits.

The girls made few pops and as M and I were making and packing the rest, they watched the movie Jumanji.

Cake pops, apron, chef hat, colored cup cake foam board and chocolates. I have individually wrapped the pops and then wrapped it in a purple film and tied a bow. 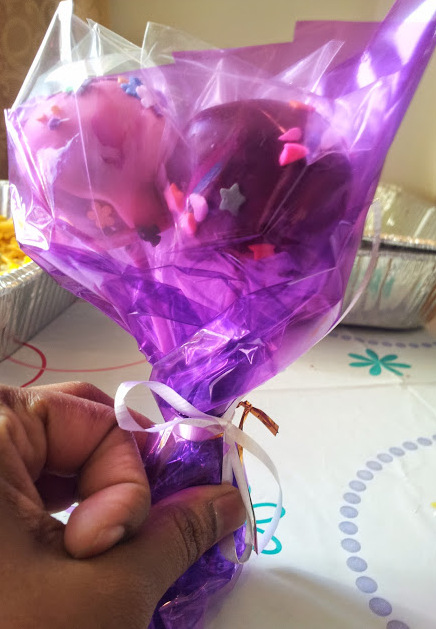 I don’t know if it was true but Adi said later the day that this was the best party ever, that this has exceeded last year’s fruit themed party and thanked me a million times.

The effort and tension was worth her happiness.

This party happened on the weekend following her bday. On her birthday, we took her to Carlos bakery as a last hour planned surprise visit and bought a birthday cake. It costed an arm and leg and don’t start me with the taste. None of us really liked it but the look on her face when we were in front of the bakery was worth the visit. M took a video of her reaction.

Phew, there I wrote the birthday updates after nearly two months. I can sleep better now.