After much procrastination, most part of this weekend was spent on the much needed cleaning. The counter top and sink were fixed last week. There are still work to be done but at least my kitchen is functional now so I decided to set it up as much as possible and also clean the living room that was partially kitchen for last two months. After decluttering living room I decided to extend the cleaning to other rooms too. Ah, the bliss of having a clean house can never match anything.

That is Adi’s room before and after. 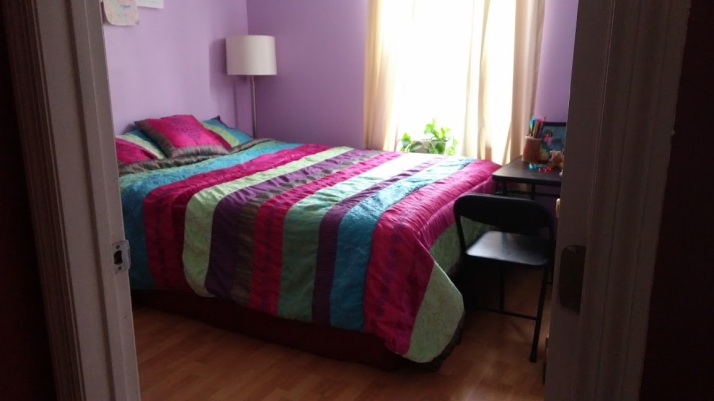 Today morning the rest of the clan made grocery run when I was indulged in my cleaning. And this is what LHB did after they returned. He made a “chu chu” train with the items they bought.

We baked apple chips in the evening. The recipe is from Sri’s blog. I let the first batch burn but the second batch came out okay. Adi liked it. Thank you Sri for introducing us to a healthy snack.

And now we are all set to watch the super bowl. Adi says she watches it for the commercials. **shaking my head in disbelief**

I am slowly getting the hang of Netflix. I know, I know. Don’t laugh at me. Watched Jobs and few episodes of Grey’s anatomy. Love this show so far.

Thank you for all your wishes to LHB. We went to temple on Thursday evening followed by dinner at Rainforest cafe. LHB turned all red when the waiters grouped to sing birthday song for him. That’s when I saw my shy boy 🙂

On Friday morning, when he woke up and we asked about his birthday, he said birthday is gone!! I was hit by stomach virus on Thursday night and was forced to take sick day off on Friday.

Hope next week is productive and just whiz pasts. I am already looking forward to the long weekend next week.